It ends not with a bang but with a whimper.

It ends not with a bang but with a whimper.

Yes, I've had enough of shouting. It gets you nowhere. Amazon's customer services robots are far too thick skinned (or possibly stupid) to realise that when someone has got to the point where they feel the need to yell, their battle has already been lost and their job description has been rendered completely irrelevant.

I left things alone over the weekend. I did not believe word one of what "Jude" said - I expected no phone call over the weekend. It was never gonna happen. Part of the reason I was so irate on the phone is because, having worked in telephone support before, I can tell when a "call centre drone" has stopped really caring about a problem. Repeating the same, unacceptable thing again and again, calling you "sir" or "madam", saying "I really do understand, but...".

Amazon are huge. When you have millions of successful transactions each week, you don't give a shit about the single missed delivery. Even when it's a gift for someone. And to be honest, the failed delivery was never really the issue. The story here was more about the discovery that Amazon Logistics, who apparently are the overall controlling body for home deliveries AND the organisation in charge of the customer service functions around those deliveries, really have no idea how to track a delivery. The revelation that the largest global delivery service can't get in touch with their contracted carriers and/or drivers directly was pretty mind-blowing.

During this whole debacle, not one claim made by an Amazon customer service representative was true. Each failed daily delivery had been "guaranteed" by the chat or call centre agent. Further proof of the "we'll just say stuff to get you off the line" mentality that has been a feature of off-shore customer service agencies for over a decade. And to be honest, the on-shore call centres really do the same. It's one of the reasons why call centre work is so soul-destroying. Either you care enough to want to help a customer but your hands are tied or you really try not to care but each time a customer loses it at the end of the phone you die a little inside, and each time you are yelled and screamed at by a customer it takes longer and longer to get rid of them, affecting your call stats and getting you in trouble... I don't know what the culture of this is in India or Dubai or wherever these "globally distributed" call centres is. Maybe it's easier if you don't share the bond of sharing the same shores.

The key point to this is that I think I've proved that the Amazon Prime "One-Day Guaranteed Delivery" is a pile of hogwash. Amazon can't guarantee anything of the sort. Yes, most of the time it works, but it's more a reflection on the delivery carriers doing their job properly than anything that Amazon themselves can take credit for. Amazon can either collect a product from a third party seller or their own warehouse and put it on a van or truck to a distribution centre. That much they can guarantee. But from that point on it's the contracted delivery service's responsibility to keep that promise, and with no way to contact these people how can Amazon guarantee anything?

The other significant thing I discovered is that other than customer service representatives, no-one in Amazon seems able to use a phone. Apparently my complaints were "raised to the highest level", but no-one at those high levels of power would be able to call me directly to discuss my issues. Maybe they don't have any hands. Maybe they can't speak. Maybe they're too busy watching Polish immigrants polish their seventh Learjet. I don't know. Maybe it's just another line of customer "service" bullshit. In any case, it definitely puts the customer firmly in their place.

So I didn't bother chasing customer services over the weekend, and as I expected "Jude" did not get in touch. His modified "promise" was to get in touch on the 7th, after the delivery window had closed, so I wouldn't be expecting much til then. To be honest I'm not expecting any phone call on the 7th either.

With Monday (yesterday) being the last possible day for delivery I left it til 2pm to see if anything came. I couldn't be bothered dealing with Customer Services again, so I decided that I would first chase up Hale Comms to see if they had found anything out. The same chap from Friday greeted me and looked through the records to see if anything had changed. Lo and behold, the seller's records listed the item as LOST, yet my buyer's records still indicated that it was out for delivery and was "expected today". Hale agreed on the spot that this was a lost cause, and expressed their apologies that this delivery had turned out like this. They also noted that following our conversation on Friday they were contacted by another customer who was in the same boat. Essentially Hale lost two sales due to the incompetence of Amazon's Logistics service. Hale immediately took the only option left at that point and offered me a refund. And I accepted. No choice left, really at that point, and at least Hale told me what Amazon were obviously afraid to tell me. That they had LOST a product.

By Monday afternoon then, the fight had been lost. Hale refunded my costs and Amazon still hadn't got in touch. Then, at half past ten at night on Monday, I get this:

This amount has been credited to your payment method and will appear when your bank has processed it.

This refund is for the following item(s):

The following is the breakdown of your refund for this item:

Your refund is being credited as follows:

These amounts will be returned to your payment methods within 5 business days.

Have an issue with your refund, or a question about our refund policy?

Thank you for shopping at Amazon.co.uk.

Note the highlighted "reason for refund". Not "We losts it, precious", but "Customer return". EVEN NOW, Amazon will not take responsibility for this incident. It's pathetic. 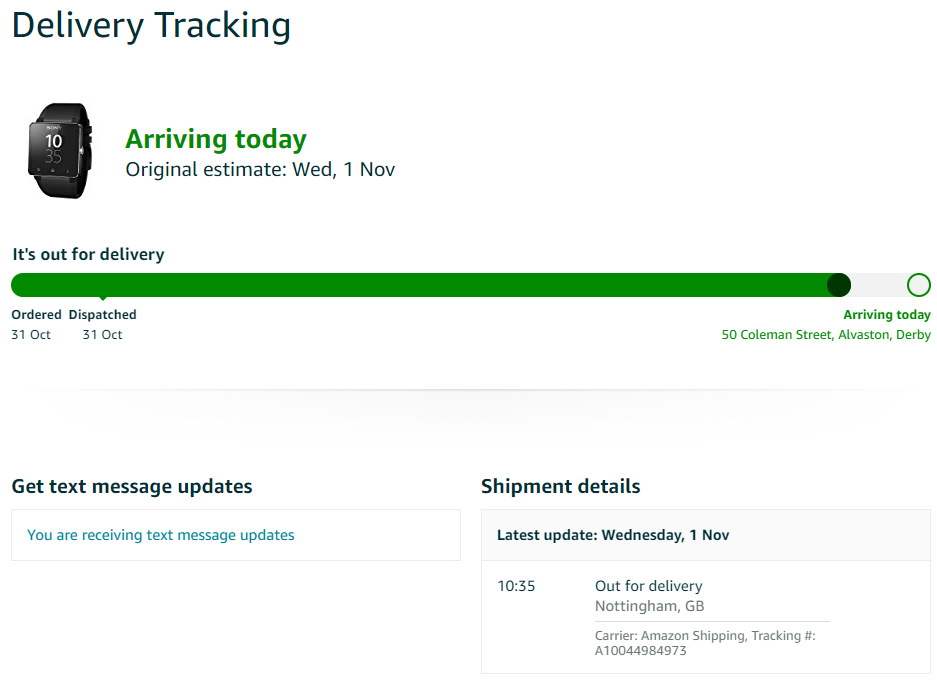 Frozen in time. Forever out for delivery until the heat death of the universe. After which the catalyst of the next big bang will no doubt be a dented brown box containing a Sony SW2.

It's currently 13:47 on Tuesday 8th November. At something like 14:30 yesterday, with the ink on the refund from Hale Communication still wet, I ordered the same watch from an Ebay trader at roughly the same price. Look what arrived LESS THAN 24 HOURS LATER! 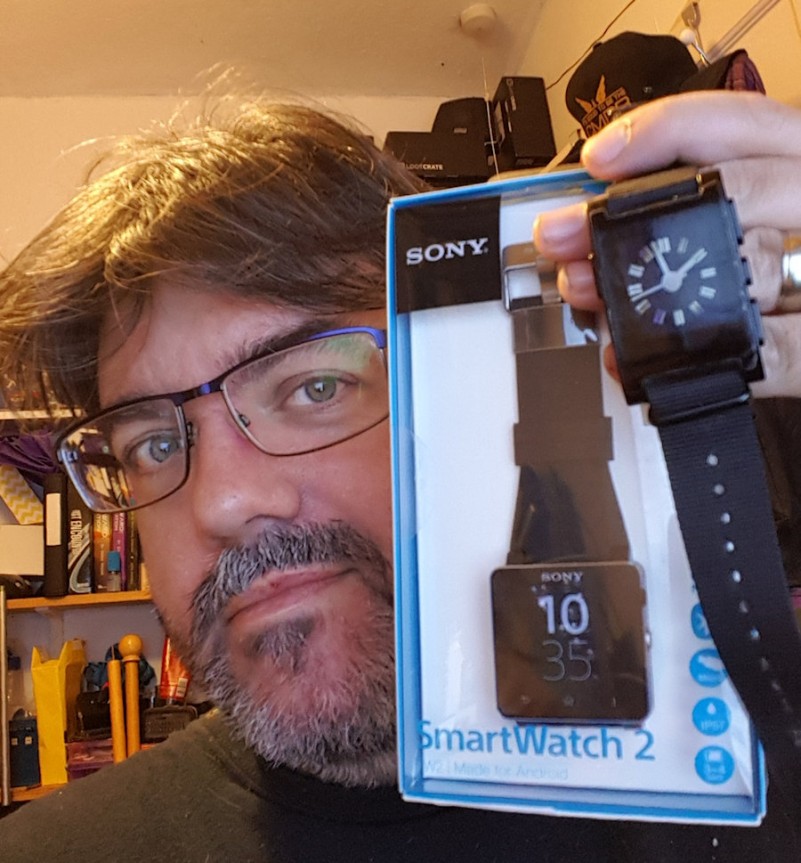 One week. Seven online chats. Four phone calls. None of which resolved the issue. But at least I have my product. No thanks to Amazon.