What good is an RPG without a way to play the game?? NONE! That's why ELITE ENCOUNTERS has a whole section of the book devoted to rules and game information.

The RPG contains a complete guide to creating a character, including how to generate the main stats, called ASSETS and TRAITS. There are suggestions for stat configurations that would benefit a certain type of character, called Trait Packages, and a collection of Archetypes that can help define a character's experiences and past careers. 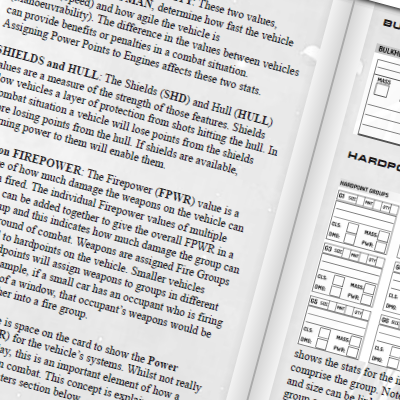 Since ELITE ENCOUNTERS has been designed to emulate the career path of a "Commander" in ELITE: DANGEROUS, templates for the major career paths are featured, including traders, explorers, pirates and assassins. All of this results in a rich and well-rounded character and all in double-quick time!

Early on in the development of ELITE ENCOUNTERS, it was decided to focus the system on speed and flexibility: the mechanism of the game shouldn't get in the way of the action. The task-based system is quick to learn and easy to use and can handle just about anything that the imagination can throw at it (including making bicycles out of thigh bones). The focus of an action can also be put on the player's ability to act out a situation to allow a greater sense of immersion. Ultimately, the stats and mechanics lend themselves well to diceless play, meaning that the ELITE ENCOUNTERS system can easily be used for online or live role-playing events.

As well as detailed character and task systems, ELITE ENCOUNTERS includes rules specifically used for vehicle encounters. As would be expected in an RPG based around a space simulation, spacecraft (as well as other vehicles) can take centre stage, with detailed record files that include hull integrity, speed and thrust values and internal cargo and equipment space that can be customised on nearly every type of vehicle. Significantly, the system has been devised to allow vehicles of different types to realistically take each other on - want to attack a motorbike with an Anaconda? ELITE ENCOUNTERS makes it possible!